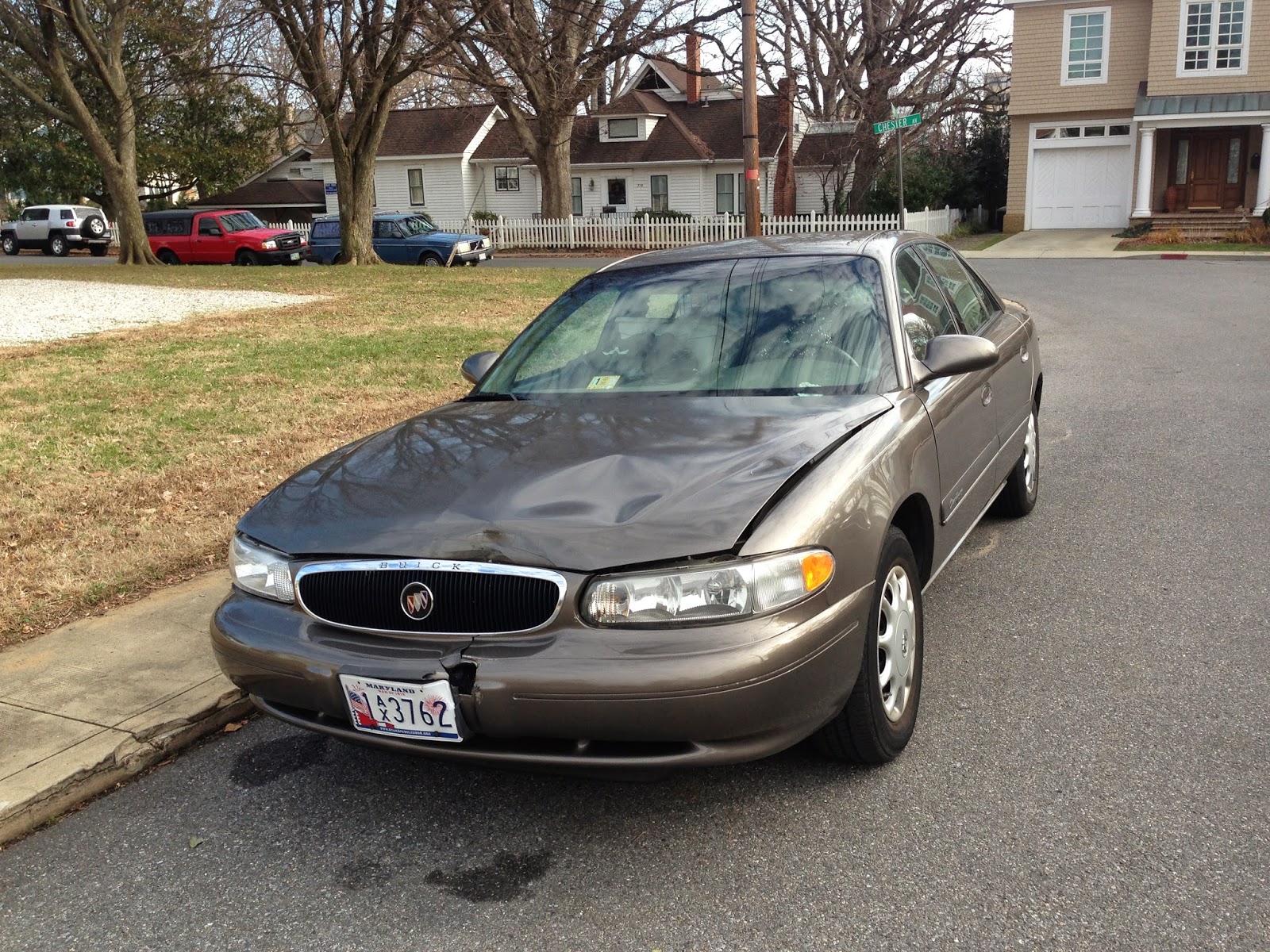 My boring old 2002 Buick drove reliably throughout our 15-month relationship. But a dead O2 sensor took my gas mileage from about 25 mpg to about 16. Although the heat and A/C worked, the fan for them gave up the ghost. And leaky doors left items on the floor soaked and the windshield often fogged up... and once, iced over on the inside (which was the final straw that ended of our brief relationship). These mounting repairs would be separate from the hefty front-end damage ($1,500-2,000) from when she was impaled on a guy's bike rack in a fender-bender. Since it was purely cosmetic damage I rather wore it as a badge of honor, or a warning... don't park too close or cut me off... I've got little to lose. But I just couldn't swallow the idea of spending a bunch of money fixing up the Buick. I had originally planned to sell her and use the money for my diesel fuel to get south. But now that I would be sticking around Annapolis I would probably need to keep some reliable wheels to get around. I took the Buick to the wholesaler and let her go. Between what I paid to buy and register it, and what I got in insurance proceeds and sales price, it cost me $500 + insurance + gas to drive the car for 15 months. Not bad, really. Hindsight is 20/20 of course, and I should've held onto her, but I'm too young to drive a Buick! 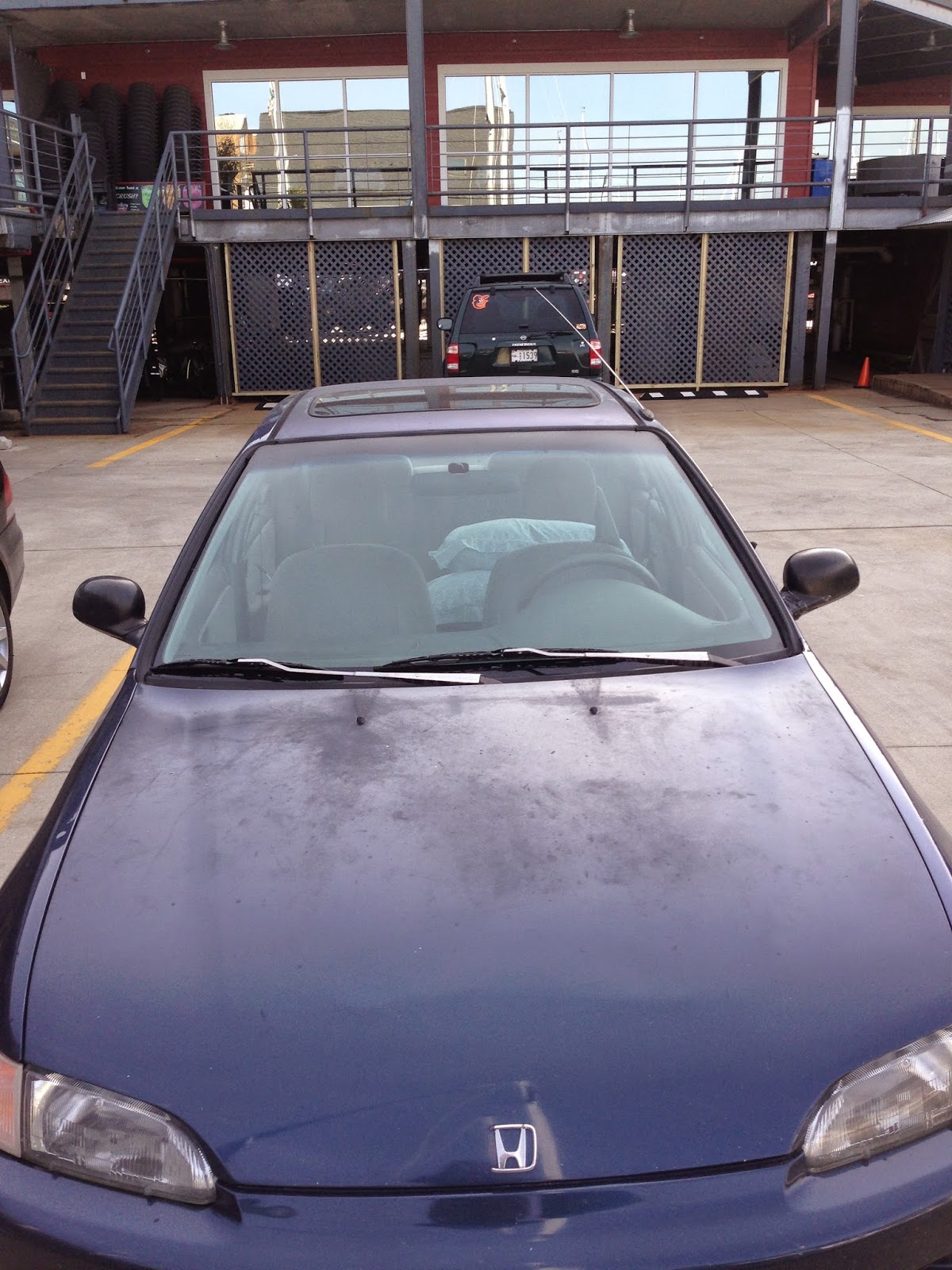 Six weeks ago I bought a 1992 Honda Civic with over 200,000 miles on it. It's the first car I've ever owned that is actually being held together with duct tape. Um, yeah, I'm an idiot. Just about every text message or phone call I have had relating to the car is overloaded with expletives. I made the huge mistake of taking a friend's advice and recommendation on the car. My gut was that it looked rough and the previous owner was simply a walking lobotomy. To say that every aspect of buying the car was a nightmare of delays and bungling is an understatement. At $1,000, I felt I was probably paying about twice what it was worth, but in reality he should have paid me to take the car. Sigh. On day two it had a freakout and the ignition lock would not release. I wiggled the steering wheel. Locked and unlocked all the doors (that was the magical trick with my old Benz' electrical gremlins). I called AAA only to have the call continually drop. At last, for no particular reason, it finally stopped beeping at me and let the key turn. 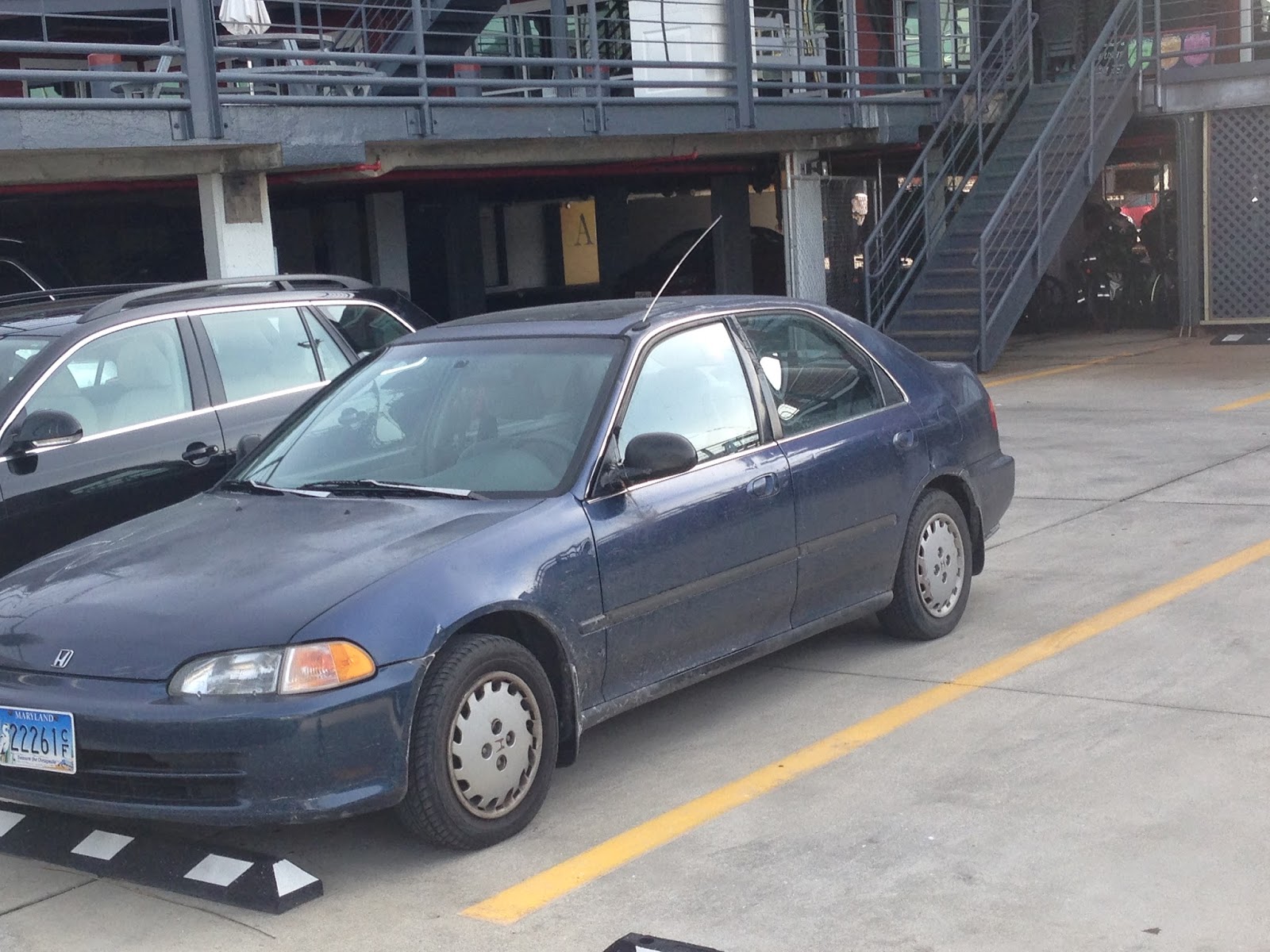 When she ran, she was a zippy little drive. But, alas, she was temperamental and unreliable. Just 3 weeks in she didn't want to start when I was leaving work. The check engine light came on, the battery-not-charging light came on, and an awful buzzing emitted as she strained. But after a few tries she started up. The next morning it was the same drama, but she finally started and got me to work. But that evening I was out of luck. She sat in the lot for the weekend and then was towed to the shop Monday. I got rides from co-workers for several days. But now it was urgent that repairs be made since my 30-day temporary registration would expire that Friday. But a whole work-week should be more than enough to get her going and through safety inspection. Naturally, the prior owner and our mutual friend had been more than confident it would fly through inspection (since the prior owner didn't understand the difference between a Maryland safety inspection and emissions testing, well, 'nuff said). A week and $1,000 in work later she did pass inspection, but she only ran a couple of times before dying again. Of course that $1,000 happened to be every last penny I had and desperately needed for boat repairs. So when I got in the car yesterday stressed about how much I could spend on groceries and then she wouldn't start, I just broke down. I pummeled the steering wheel with my fists and screamed and cried. $2,500 into the car between purchase, repairs, tax, tag, and title, and the car doesn't run! Arrggghhhh!!!

My karma clearly sucks and the universe is getting even with me. Saddling me with a money pit unreliable car when I need to pamper my beloved boat. I begged my mom for back-up if another big bill was about to come crashing down and had the car towed to the dealership. At least I have a friend working at the dealership so I feel less likely to get overcharged and jerked around. It was my only day to run errands and get groceries and now I was out of luck. I should've just taken a deep breath and dove into boat projects but the gloomy rainy day was conspiring against me. I drowned my sorrows in potato chips and a Hershey bar and a strawberry laffy taffy, watched a couple bad movies, took my sleeping pills and went to bed early. I told my pets and my boat that I love them. And though the tide had sunk like a stone overnight in the heavy winds and it was not even 40 degrees out, I was determined to be bright-eyed and bushy-tailed this morning and got in a five mile run to start the day (and make up for the prior days' junk food binge).

When the dealership called and told me I just need a new main relay I was pretty incredulous. The other shop allegedly put in a new one, and then a new fuel pump. But the dealership says she's fixed and the bill was shy of $200. I don't know if the other shop simply ripped me off or not on the relay switch, and I don't really have the fight in me to get into it.  Luckily, I had a friend willing to drop me at the dealership and I retrieved her. She started up fine and didn't let me down as I ran a couple errands before heading home. Fingers crossed she keeps running.

I had wanted to name her, but couldn't settle on anything. I'm tempted to call her "bad karma" but it's bad luck to name a boat anything like that (e.g., a hole in the water, money pit, etc), and I fear the same may hold for cars. Maybe I'll just call her "dockbox." Even if she doesn't run, I guess she can be a very expensive storage facility. Sigh. How about Bluebell? Blue Bunny?

Next up: I need to get that throttle cable replaced so I can (1) move to a new slip with (hopefully) less adjacent car noise but more annoying tourists taking their pictures in front of our boats, and (2) get this vessel out on the bay for some much-needed (if not deserved) fun and adventures.
Posted by Suzy at 9:52 PM