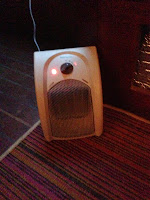 The oil-filled radiator I bought last winter already gave up the ghost. That was the one heater safe to leave running when I'm away from the boat so the pets aren't shivering and systems stay above freezing. I had to borrow back a small space heater I had given a friend. We're getting by with it, but I don't feel safe leaving it running when I'm not aboard. I may try taking the oil-filled one back to the True Value to see if it is still under warranty, but it'll probably have crapped out on day 366.


It's hard to see because of the boat's shadow, but if you look carefully you can see the rudder extending above the water in the first shot below. In the second shot you can see that the water is at the boot stripe above the bottom paint toward the bow, but the bottom is more and more exposed moving aft.  I have a boarding gate amidships, lined up just before the end of the finger pier. It's a long walk down that narrow little pier late on a gusty night.

I've been checking the depth sounder frequently to get a sense of how low the water levels are getting already.  A couple of nights ago it was at 4 feet. Last night it was so low that the sounder simply wouldn't give a reading at all, just a series of dashes on the screen. This morning we were at 3.3 feet. The downhill walk in the boat is noticeable and small loose items quickly roll toward the bow. The boat is resting on its keel in the mud, tilted forward, and with the rudder sticking a few inches out above the water. Farther down the dock, the "dinghy dock" is high and dry and the slip beside it has only a couple of inches of water and only on one side of the slip. A neighbor has left his small powerboat aground and doesn't seem concerned. 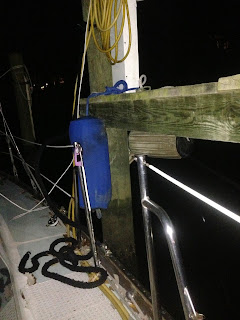 Last night was perilous and stressful, for both me and pup dog. I measured the distance from the deck to the finger pier: 36.5 inches. Even when sitting on the pier there is still a good distance from the bottom of my feet to the deck, and just too far to reach even if I scoot to the edge and stretch my foot forward. I have to summon some courage and all at once reach down for the stanchion aboard with my right hand as I push myself off the pier with my left and try to firmly plant my feet on the deck. If I slip and fall between the boat and the pier I'd only be in a few feet of water, but I would probably sink in the mud, the water is already very cold, and I may hit the boat or pier on the way down. With no one else in the marina, no one would hear the commotion or calls for help. There aren't any ladders along the dock, so I'd have a hard time getting out of the water and back ashore. It's much easier to handle getting on and off the boat in these conditions during the day because the visibility seems to make it much less psychologically challenging. On the other hand, during the day it's more likely neighbors are chuckling to themselves watching me pull myself up, laying flat hugging the narrow pier, inchworming to pull myself up the electrical pedestal, steadying myself to turn around, and then carefully walking down the pier to get ashore. 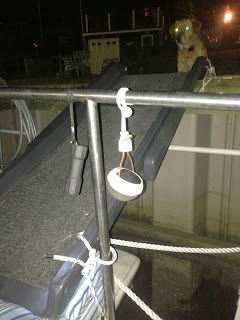 Once I got safely aboard last night that was it; I was in for the night. It is just too frightening getting on and off the boat in these conditions. But as I worked away on the computer the pup dog sat at the base of the steps staring at the door. I put down a piddle pad in the head and told her she absolutely wouldn't be in trouble if she went there. She would sniff it and then just sit down and give me the saddest look, with her ears back, begging me to take her out.


I told her she wouldn't like it. I told her she should just go on the pad. I finally broke down and took her topsides. She balked at the ramp, as I knew she would. But she had to "go" badly enough that she finally went up it. A huge mistake I really must not make again. Once she was ashore she refused to come back down the steep ramp. I can better ensure the ramp doesn't fall off the dock if I am on the boat holding it than if I try to hold it from on the dock. And I didn't want to risk getting on and off the boat again. I begged and pleaded with her. I commanded her sharply. She would try, and then whimper pathetically and lay down. Lights were on in the marina owner's house, so I called to ask for help. But they were already in bed. I tried calling the club across the street but just kept getting voicemail. When we heard the car there start and drive away we both knew for sure we were just on our own. If I didn't have any friends close by I could call at 10:30PM to help us, I certainly didn't have any at 11:15PM either. Any friends I might have asked for help were long asleep. 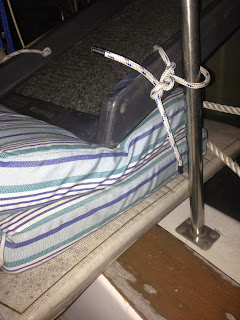 I thought propping the ramp on several cushions to raise the end about 8 inches, flattening the angle of the ramp, was pretty ingenious, but pup dog still wanted no part of it. I tried to ply her with treats and with a bowl of kibble. I kept pleading and commanding. Even when I broke down and cried she just whimpered and refused to come down the ramp. At one point she ran down the dock and then toward the gate and barked very loudly, very aggressively, imploring the neighbors (who never so much as nod a hello) to come help us. I finally resigned myself to going ashore. I wasn't sure if I'd have to put the heat on in the bathhouse and have her sleep on the bathroom floor (I should've taken some towels for her, just in case), or if I'd actually be able to shove her down the ramp. She tried to get away and I had to pick her up, legs flailing, and set her on the ramp, begin shoving her butt, and hold onto the ramp as best I could to keep it from retracting and falling off the dock. She balked at the end of the ramp because she had to then hop down into the cockpit, but she finally did it and then inhaled the bowl of kibble sitting there. She knew I was pretty mad at her and I knew she was just scared and didn't want to be in trouble. I gave her a big hug and told her she was brave and smart, but we just can't do that again. Somehow we managed to get through the process this morning, but the tide was a couple inches higher and the light of day seems to make it less scary for us both. Still, I have got to train her to use the Astroturf door mat on the deck. It's increasingly tempting to move the boat as soon as possible even though I have to pay through the end of the year at this marina.


On the upside, our heated mattress pad arrived yesterday. I unpacked it, read over the instructions, and then tried to make the rectangular pad fit in some logical way on my almost-triangular mattress. I set each side on high and let it get started. A note mentioned that it will not feel hot to the touch. That was a little disappointing. But the note reassured that once in bed, the warmth from the mattress pad would be noticeable and relaxing. I don't know if the pets were able to feel it through the duvet, down comforter, and top blanket, but under the covers it was definitely cozy. A few times I wanted to kick the covers off a bit, but then the cold air would nip at my toes and I'd tuck myself under the blankets again. The instructions say to keep it away from pets and not jump on it to avoid damaging the wires...yeah, no way around a 55 pound dog jumping up and down on it several times a day, so fingers crossed it holds up. So far, definitely worth the $110 investment.


Circa 8:30AM this morning, weather report:


Time to brave the cold again to shower ashore. Can't put off washing my hair any longer, that walk coming back from the bathhouse is gonna be chilly! I might prefer a warmer climate soon, but even with the daily challenges I wouldn't trade living aboard for anything.
Posted by Suzy at 1:35 PM