The plan is actually that there is no plan. Strangely enough, I am very pleased and relieved with this development or realization.

It's ironic that learning to anchor is what sets you free. Wouldn't anchoring imply being tied down? But instead it means you have the freedom to go anywhere you have enough anchor rode to let out. There's mud on my anchor and somehow that means cruising away is that much closer. 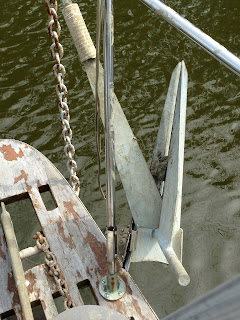 I had hoped to head south after boat show this fall. The telecommuting gig I'd been developing not working out seemed to have nixed that plan. But the reality is that, as a practical matter, I simply have to be able to anchor and dock the boat solo, and then I can cast off the lines. As a technical matter, I do have to solve the issue of loading/unloading the dog from a dinghy and get some solar power as well. From a financial perspective, there's no reason I can't hop my way south, gradually reaching Florida and then the islands, and pick up simple unassuming jobs along the way. I have friends here in Annapolis, have put down some shallow roots, but Annapolis will be here whenever I return. The same regulars will be at Davis' Pub, the usual suspects will still be around, and good friends will come visit me as I chart new adventures. So, the plan is very loose and flexible, but that is a good thing. There will come a day when the time is right...would it be nice for it not to be in the middle of winter, sure, but you just never know when the stars are going to align. I didn't move aboard to be stuck in one place...isn't the point to go see the world and have some adventures? We may have to do it on a shoestring, but that usually makes it far more interesting anyway.

Yesterday marathon and ultramarathon training began in earnest with a modest 10.4 mile run. Long runs will quickly build to 20 miles over the next six weeks. I am officially registered for the NCR Marathon in late November and then the Seashore Nature Trail 50K in December. 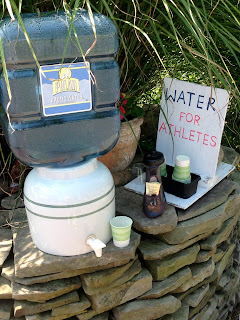 I have no idea who these folks are who keep this water station stocked, but I think I will have to send them a thank you note. On hot days I wouldn't make it through my run with only what my handheld water bottle carries. These folks have some very good runner karma. I wonder if they realize what a difference they make for strangers running through their neighborhood.

I hailed the pump out boat this afternoon. I still can't get used to them calling me "Captain" on the radio. 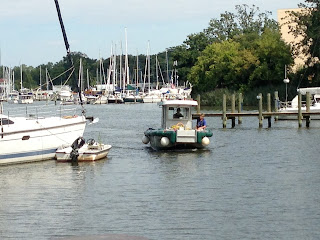 It was the same guy who has been to the boat before and as usual he was friendly and helpful and asked how things are going aboard for me and the dog. When it came time to pay for the pump out I handed him $10 for the $5 pump out and explained that previously I hadn't known the etiquette for tipping on pump outs. I told him that feeling that a measly $1 tip last time wasn't right, even if it was 20%, I had asked a friend about what's customary and did some research on the boating forums as well. I told him I wrote a whole blog post about tipping for marine services and that even if most sailboaters are as cheap as they are reputed to be, I did not want to fall into that category when it came to tipping dockhands and such. It sounds as if it certainly is a big portion of their pay and much appreciated, and I'd rather be known to treat them well and get prompt service.


In the next few weeks I'll be getting my Basic Keelboat certification. I'll likely be able to singlehand the boat under power before I can singlehand her under sail, but I'll get there before too long. Still working on lining up someone to go up the mast before I change out my running rigging, but before long we'll be hoisting the sails and heading out. I wonder if I can teach the pup dog to grab a sheet and unfurl the jib? 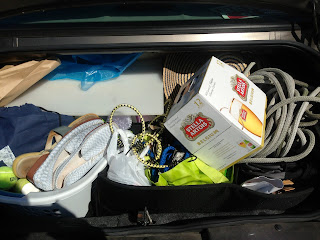